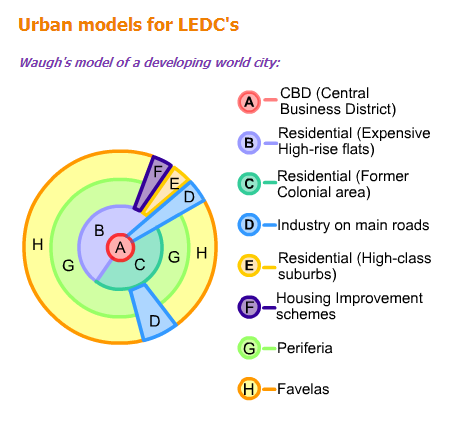 Based on cities of the developing world, using some of the ideas found in the MEDC models, but also incorporating the urban features only foundi n LEDC cities.

The CBD is still central to the urban area, and is the area of highest landprice. However around it is the most expensive residential areas. In someplaces, such as Sao Paulo, this means huge luxurious high-rise apartment blocks, whilst in others, such as Delhi, the former colonial areas are the most lucrative in which to own property.

Industrial development is along major transport routes, whilst there are also sectors of high-class housing.

The most striking difference between the LEDC model and the MEDC models is the remaining residential areas. They have been divided into three sections.The periferia are low class, poor quality houses. However they do have limited amenities and are permanent homes.

The favelas or shanty towns are illegal settlements, where the houses are built from what ever the people can find, and there are no basic amenities.In some cities, such as Sao Paulo, schemes have been introduced to help the residents of the favelas, and these people can be found in the sector of housing improvements schemes. (from S-cool)

LEDC Land Use Model: Comparison with Burgess and Hoyt.

The LEDC land use model has some similarities to Burgess and or Hoyt. The CBD is found in the centre of the urban area, just like Burgess and Hoyt. Factories are also built along major transport routes like Hoyt.

However, when it comes to housing, there are significant differences. The high quality housing tends to be located near the CBD and will be either apartments or old colonial houses. The richer people want to live near the centre because that is normally where the best entertainment is and the best jobs are. As well as the high quality apartments near the centre, richer neighbourhoods will also develop that have good quality housing and good entertainment. In El Salvador this might include areas like Escalon, Zona Rosa and Santa Elena.

Slightly further out you get poor, but permanent housing. On the edge though where in Burgess and also Hoyt you found a lot of nice housing you find poor informal settlements built on marginal land. The informal housing has been built by migrants moving from rural areas to urban areas.

Industry tends to be focused on the main transport routes (roads and railways). There will not be much high quality housing near industry because richer residents don’t want to live near polluting factories. However, there will be more poorer housing and informal settlements because the people can’t afford to live anywhere else and often work in the nearby factories.

In reality most people don’t experience all the push factors they expect and most actually end up living in poverty in informal settlements on marginal land on the edge of the city.
(source Greenfield Geography)

Mumbai is considered as a mega city as it has nearly 20 million residents. Most of this population comprises of migrants from across India. Primarily from the northern state of Bihar. About 75% of the migrants come from rural areas. India being an LEDC, there are very few urban areas and due to the poor agricultural conditions in rural India most of the migrants in Mumbai immigrate to gain better economic benefits. Mumbai is also the financial capital of India and this makes it an even more attractive place for the rural migrants. (source)

Why do Indians migrate to cities in such large numbers?
Large numbers of young people are migrating because rural India is saturated and cannot provide employment opportunities for a growing population. Many end up as rag pickers or casual construction workers. They come alone and then bring their relatives or friends. It is a chain migration.
Most women migrants have migrated after marriage. In north India, women are not supposed to marry a man from the same village. So invariably marriage means migration.
Joining family members is the third reason. First, the husband gets employment and settles. Then, if he can get a decent house, he brings his family.
Finally, migration for education also takes place.

Why aren’t there enough jobs in rural areas?
Youngsters are not able to get enough land to cultivate. Unlike in European countries, where only the eldest inherits property, here all children get a share in their father’s property. That leads to division of landholdings. Many landholdings have become so small that they are uneconomical.
There are not many other employment opportunities in rural areas so that leads to migration, not just to urban areas but also from less agriculturally developed states like Orissa, Madhya Pradesh, and Rajasthan to ‘Green Revolution’ agricultural areas like western Uttar Pradesh and Punjab.

Dharavi, is by no means the biggest slum in the world, in fact there are bigger ones around Mumbai. However it is still an excellent example of how a slum has developed and how the people who live there have made it their home.

Believe it or not, you can go on a tour of Dharavi and you have just got a job with the tour company. Your job is to use the photographs and other information on this page to produce a guide to Dharavi. Your guide should include the following information.
Part 1
The location of Dharavi Some basic facts about Dharavi (size, population, approximate population density)A short history of the Dharavi areaWhere have the people of Dharavi come from. Which rural areas of India have they migrated from.What life is like in Dharavi? (Homes, sanitation and other services, industry, jobs, schools, way of life)


This is an excellent page of information on Dharavi. Make sure you read it!

Complete this excercise and copy and paste the completed text into your notes.

The Future of Dharavi: The plan to redevelop Dharavi

Tour Guide Part 2: Add the following information to your guide using the links below.

Use the information from this page to describe how Dharavi can be better managed and improved.

Put the information into the note taking frame below and use it in your guided tour.

Complete this exercise and copy and paste your completed answer into your notes.

Read this excellent summary of the growth of Mumbai
mumbai_megacity.pdf

Listen to this radio programme from the BBC and make note of what the plan involves and the pro’s and con’s of the redvelopment plan. You may wish to do further research to find out more.

BBC Radio 4’s Crossing Continents on Dharavi was broadcast on Thursday, 14 August, 2008
This Note taking frame will help you to structure your note taking.

World’s most famous slum must be remodeled not redeveloped.

It is worth reading the comments on each of these talks in order to fully understand the different opinions on this difficult subject.