Night Lights Quiz: can you identify these cities from space.Click on the image and take the quiz from the Guardian website.

Do the cities have anything in common when seen from this perspective?

Sphere of influence and threshold population

When you find a function, add it to the table in your work  book. Add a photograph and a short description.

2.  What type of shops do we find in Basel City Centre? Complete a table using your knowledge of Basel or another city that you know well.

3. Complete the table of service provision in Basel found in your settlement work book. Make sure that you describe their location accurately using street names and compass directions. Make sure you include examples of the following services. 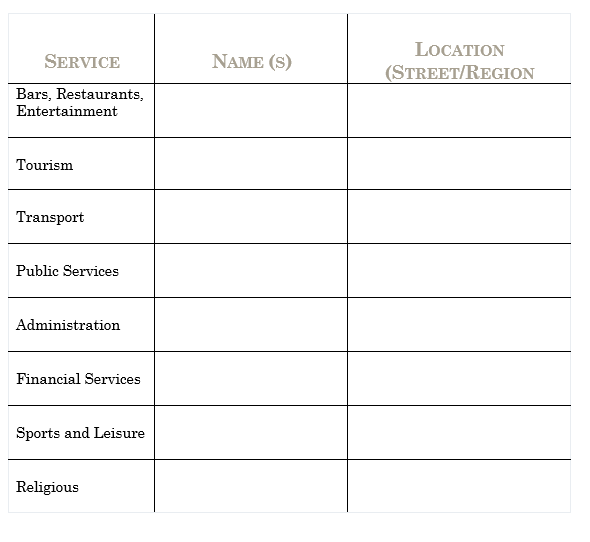 4. Find the closest supermarket or convenience shop to your home. Describe its location and what it sells.

Describe the service provision for a named urban area that you have studied. (7 marks)

3.5.1) Why do people travel travel further to some shops than others? 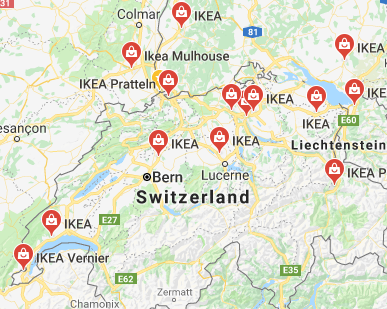 e) Describe the location of the IKEA store in Pratteln using map 2 below.

f) Why do you think this location was chosen for the IKEA store? 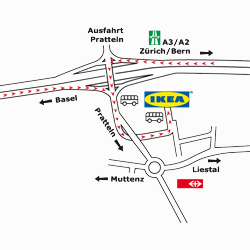 g) Describe the type of goods that COOP sell.
h) How often do people visit COOP?

i) Describe the location of Basel Euro Airport using this map. Make sure you mention the names of the Autoroute and Autobahns and other transport connections in your description.

j) Why was this location chosen for an airport? Give examples do support your answer.

k) Compare the sphere of influence of the Euro Airport, a COOP and IKEA?

Hamlet – Perhaps a phone and a few houses.

Conurbation – A city that has expanded into the surrounding towns (urban sprawl) and is now one big settlement under one name.

1) The image above shows a simple model of settlement hierarchy. Click on it and read the information, making notes as go. This is important. Make sure your notes are detailed.

2) Below is a more detailed image showing how the numbers of services is linked to population size. I would like you to use this image as a template to create a detailed settlement hierarchy for Switzerland or a country of your choice.

Include at least one settlement for each level of the hierarchy.

Find out the most update population data you can for each settlement.

Give examples of the services available in each settlement. Wherever possible you should include both high and low order services.

……or maybe we’ll create a board display instead.

You may use the .ppt below as a template on which to create your Hierarchy.
settlementhierarchyworksheet.ppt

Part 3: Urban Land use in MEDC’s

Different areas of a city are used in different ways. Watch the video below and try to identify how the land use changes as you travel through London.

How do you,”use,” Basel? Think about the places you go to in Basel and why you go there. Can you find them on the map below? Is there a pattern?

There have been a number of different models created to help understand how the land in urban areas is used.

The Burgess model is the simplest.

A) Summarise the information above the worksheet below.

B)Go to Google Mapsand use the street view tool to find the locations of the photos you took on your way home.

Swap and share photos with your class mates to get as many locations as possible.

C) For each photo decide which of the land use zones it best represents.

D) Mark the location of each photo using a marker. The colour of the marker will depend on the land use zone you place it in. Use the model below as a key.

E) Complete the table below using the photo’s and information from the map you’ve created.
Basellandusetable.doc

F) When you have finished this, compare the Burgess model to the map of Basel you have created and the Basel Land Use Table you completed.

i) Describe the CBD of Basel using named examples of locations, shops and other businesses services.

ii) Give a named example of high density, low cost housing in the Basel area. Describe its location.

iii) Name an area that has high class residential housing in the Basel area.

iv) Describe the difference between the houses in the areas you have named in parts (ii) and (iii). Who is likely to live in each of these areas?

v) Why do you not see any factories in the centre of Basel? Why are many buildings taller than in other areas of Basel?

G) Does transport effect land use?

Click on the map below to see a larger map of Basel’s tram network.

i) Why would it be an advantage to live close to a tram line?

ii) Do you think tram lines affect the type of land use, which zones from Burgess’ model would you expect to find close to tram lines. Will it change as you go farther away from the CBD? Explain your answer and give examples where possible.

Hoyt’s model was developed in 1939. It takes into account the impact of transport routes. It also suggests that certain land uses repel each other. It makes sense, would you want to live next to a factory.

i) Can you name an area where there is low class housing next to light industry?

Extension 1: Other Models of Urban Land use

Look at the model below. Can you describe and explain the difference between the Hoyt model and the Multi Centre (Nuclei) model proposed by Harris and Ullman. Click on the image to find out more.

1) Describe and explain the relationship between Land Price, Land use and Distance from the city using the model below.

Urban Sprawl is the spread or growth of an urban area into the rural-urban fringe. We are going to look at the impact that this process has.

1) Describe the location of an area in Basel that has been affected by Rural Urban Fringe. It is likely that you can use the area where you live. Use this map to insert a map from 1900 and the present day that shows your chosen settlement.

2) Describe the changes that have taken place in your chosen area between 1900 and today. Name specific places, street names etc.

Conflict on the Rural Urban Fringe.

As Settlements grow, demand for land increases and this can lead to considerbale conflict. Whilst housing developers will want the land to build houses on, industry may want the land for offices or factories. Local people may object to the increase in traffic and pollution.
Conflict Rural-Urban Fringe.docx

1) Why do you think so many different names have been given to this zone? What do these names tell us about this zone of the city?

2) Use a map of Basel to describe the location of Erlenmatt. In your description you should mention the proximity of the area to Basel’s CBD, the Novartis Campus and other companies, transport links such as the Bad Bahnof, Autobahn and trams stops etc.

3) Why does the location of Erlenmatt make it a good place for people to live?

The photo below shows the Erlenmatt in 1990. If you click on the photo you can find more information about what Erlenmatt. Use the photo and the information to answer the next questions.

5) What sort of housing would you have found around Erlenmatt when it was still an industrial area?

The Gentrification of Erlenmatt:

6) Click on the image above and explore the Erlenmatt project. Write a detailed description of project describing what has been built. Include housing, services and green spaces in your description.

8) What are the advantages and disadvantages of devloping a Brownfield Site?

9) The Photograph below shows the inside of one of the new Erlenmatt Apartments. Make a note of the following information.

9) Describe the type of people who would chose to live in this apartment. Explain your answer.

10) The Erlenmatt development is an example of Gentrification. What does this term mean.

11) What benefits will the gentrification of the Erlenmatt area bring to the residents and the city of Basel?

12) Read the articles below. Many people oppose gentrifictaion, using examples from the article, explain the problems associated with gentrification of inner city locations such as Erlenmatt.

1) Explain why inner city areas such as Erlenmatt are being redeveloped? (3 marks)

2) For a named example. Describe the redevelopment that has taken place. (5 marks)

3) Describe and explain the advantages and disadvantages associated with a named inner city redevelopment project. (7 marks)

An Out of Town Shopping Centre: St Jacob Park, Basel 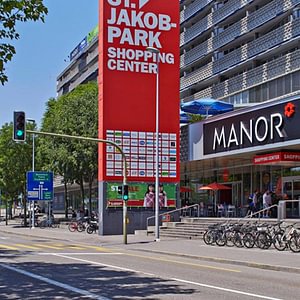 For a named example you have studied, explain the growth of an out-of-town shopping area. (7 marks)

Use the information below to complete the table in the word document below. Give as much detail as possible.

a) The Decline of the CBD

How can Amazon have an impact on the CBD?

How Basel is helping businesses in the CBD

10 monster traffic jams from around the world

Solving the Problems of Traffic Congestion in Basel

Why Delhi is losing its clean air war

What other forms of pollution could you expect in Urban areas?

Top 10 most dangerous cities in the world

In all large urban areas attempts have been made to solve the problems faced by the people who live there. These include problems such as:

Choose either one of these problems or any other problem faced by people who live in urban areas. For a named urban area, describe the attempts which have been made to solve the problem which you have chosen. [7]

What is the Future of Cities? How can we solve the problems associated with urban areas as they continue to grow? Are cities more sustainable than a rural lifestyle?

The geographyalltheway.com section on settlement.

Describe and give reasons for the characteristics of, and changes in, land use in urban areas

Land use zones including the Central Business District (CBD), residential areas, industrial areas and the rural-urban fringe of urban areas in countries at different levels of economic development

Explain the problems of urban areas, their causes and possible solutions

Case study required in 1.6: An urban area or areas (Basel or city you are most familiar with)